The new ASUS Chromebook Flip C302CA-DHM4 is a 2-in-1 convertible laptop that runs on Chrome OS. This is the second device of this type I’ve seen hit the shops, after the Samsung I’ve reviewed a couple of days ago.

Unlike traditional Chromebooks, I have noticed a push from companies to introduce more premium-like, user-friendly models to their lineup to garner users who aren’t on the lookout for cheap, expendable Chromebooks. Rather, they’re starting to cater to folks who search mid-range performance. 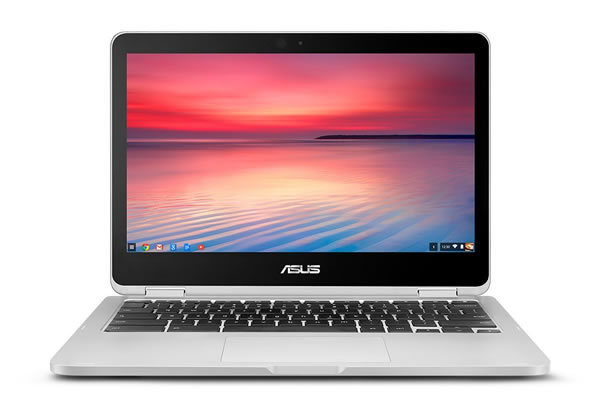 The ASUS C302CA-DHM4 is no different. It’s a 12.5″ 2-in-1 convertible Chromebook, well suited for travel and productivity on the go. However, its price (we’re talking about $500 at the time of this review) suggests a premium-like approach to what were once exclusively affordable models. The spec sheet back that up, as well as build quality.

This specific model is powered by a mobile-optimized processor: the Intel Core m3-6Y30. It’s a dual core, low-frequency (900 MHz, up to 2.2 GHz) CPU that comes with 4 megabytes of cache. Don’t let the seemingly low frequency rating fool you. This is no entry-level processing unit. Performance-wise, I can compare it with modern mobile Intel Core i3 processors, so getting everyday tasks done won’t be an issue at all.

The ASUS Chromebook Flip comes with 4 gigabytes of on-board memory. Unfortunately, I’m not sure as of today whether we’re talking about DDR3 or DDR4 RAM. Still, for a device running on Chrome OS, the amount of system memory that has been provided by ASUS is adequate. Also, it’s worth mentioning that you can’t upgrade it any further – 4 gigs is the upper limit.

Storage space is more abundant than on the Samsung I’ve mentioned earlier, yet still tiny. You’ll be able to store your files locally on a 64-gigabyte eMMC drive. However, every user should take notice and use Google’s Chromebook offer, which gives every device owner 100 gigabytes of free storage space for up to two years on their own Drive cloud storage solution.

Learn more about the ASUS and read user reviews at Amazon.com »

As is the case with many touchscreen convertible laptops, its display panel is perhaps the most important component. The ASUS C302CA-DHM4 has a 12.5″ LED-Backlit FHD glare panel with 50% NTSC. While not exactly spectacular, the 16:9 aspect ratio suggests a device which is optimized for media content first, and heavy work second. 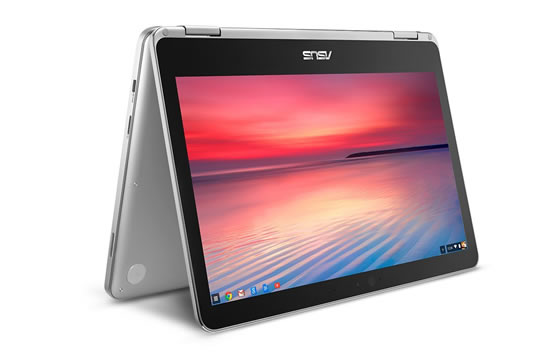 It also has an integrated light sensor, which changes the screen’s brightness settings automatically, depending on your surroundings. And thanks to its 360 degrees rotating hinges, you’ll be able to use the ASUS as a laptop, as a presentation tent or as a tablet.

Even though interface options are not limited per se, including only USB-C ports dismisses a large portion of users who rely on ports like HDMI and USB 3.0 for peripherals. Now, said users should also carry around adapters, which isn’t that elegant of a solution. Anyway, the available I/O ports are:

It’s also worth mentioning that this device features an illuminated chiclet keyboard, with large keys and enough travel space to make typing a pleasant activity.

A 12.5″ will obviously be portable, but weighing 2.6 pounds, I’d say the ASUS C302CA-DHM4 isn’t the most impressive member of the Chromebook family. Sure, it’s so lightweight, that a .2 pound difference is mostly insignificant at this point. For a more featherweight experience, check out the Samsung Chromebook Plus. 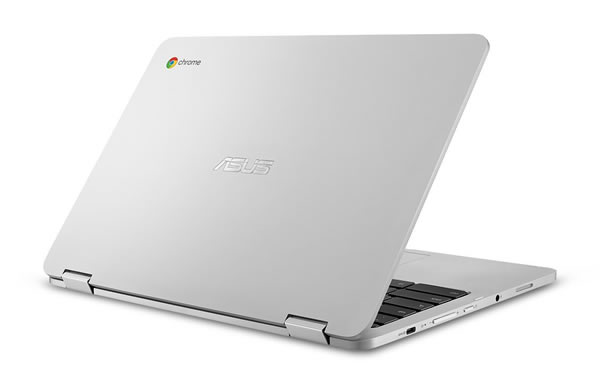 Its 2-cell, 39 WHr battery pack will hold a charge for up to 10 hours. Great feature, although it has become rather standard for ultraportable, mid-range laptops in the last year or so. A full charge will power the ASUS for a whole day’s worth of work, or for most of the duration of the Los Angeles to Sydney flight.

After looking at its features and specs, it’s safe to say that the ASUS Chromebook Flip C302CA-DHM4 is a great convertible laptop that should be considered especially by seasoned travelers, home and office users and students. Professionals won’t struggle with its performance either, but they have other choices that should deliver more.