The Acer Predator Helios 300 PH315-53-71HN is a mid-range gaming laptop with a rather impressive spec sheet and better than average thermals. What really sets this laptop apart is its CPU-GPU combo. Both are extremely fast when gaming. Furthermore, if you’re planning on using this machine as a workstation, it’s well equipped for such a task as well.

This laptop can be put to work immediately after unboxing it. There’s some bloatware installed, although uninstalling it is a simple and straightforward process from the get-go. Using the standard configuration of 16 gigabytes of system memory, the Intel Core i7-10750H processor and the RTX3060 Mobile GPU, you’ll be able to play most modern games without any issues. For instance, you should expect 50-55 fps while playing Cyberpunk 2077. Obviously, other titles will run flawlessly. As such, expanding the available system memory isn’t required for you to get decent framerates, although more RAM hasn’t hurt anyone.

There’s a single issue though, and that is fan noise. When fully activated, the Predator’s fans will feel like a jet is taking off in your room. However, they’re very effective at cooling down the system when temperatures reach 65-70 °C.

The Acer’s screen has nothing spectacular going for it, apart from the 144 Hz refresh rate, its keyboard is rather nice for a gaming laptop and construction seems pretty solid. Battery will only last so much because of the high power draw of both the CPU and GPU. While gaming, you’ll be lucky to get an hour worth, while other tasks should offer around 4 to 6 hours.

Should you buy the Helios 300?

If you don’t mind the flashy and aggressive appearance of the Helios 300 PH315-53-71HN, yes. It offers fantastic value for money, especially in terms of processor and graphics capabilities. Furthermore, it’s a futureproof laptop, enabling you to double its system memory and add another storage drive down the road.

The Acer is a heavy laptop, so buying it for everyday tasks if you commute to work or around the campus isn’t advisable. Otherwise, this gaming notebook will feel almost like a gaming desktop at home, minus the fan noise.

Less expensive models, like the ASUS TUF Gaming A15 or the Lenovo IdeaPad Gaming 3 offer less performance for more than half the price of the Helios 300. So, if your budget allows this $1,200+ gaming laptop, you should really consider it.

See it now at Amazon » 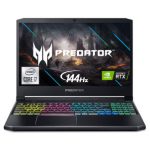